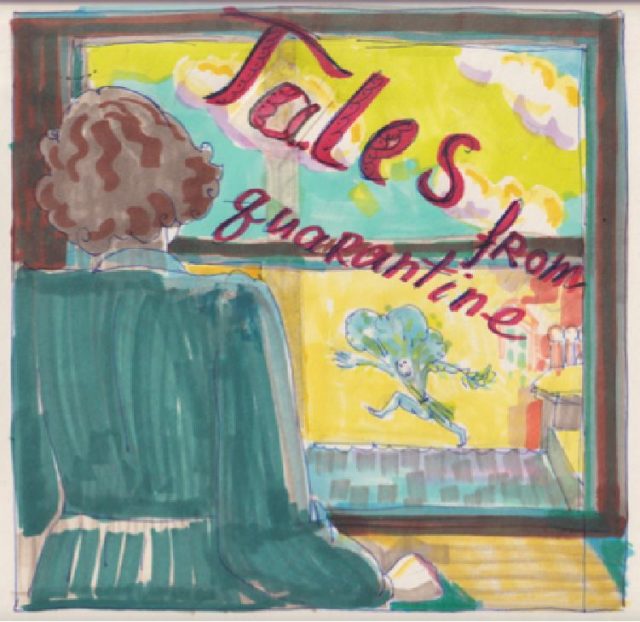 Once upon a time there was a Bouquet.

A girl brought him to her mother in the twilight hours, on the steps of Tate Britain, where they sat on a bench at
two metres distance and talked and talked. Not a soul passed by.

The woman took Bouquet to her studio, where she was in quarantine. She put him beside the window in the kitchen, so she could see him all the time, and continued getting on with her chores. Like tapping on the computer, painting occasionally, cooking dinner, talking on the phone with her children and her mother, watching complicated theatre performances on YouTube or cutting coloured paper. 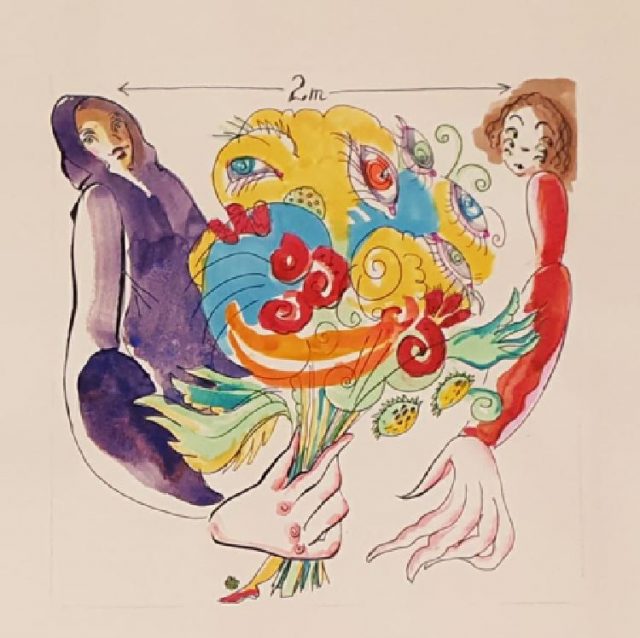 Bouquet was curious for a little while, but soon found all these activities rather dull. | don’t know exactly what he expected. There were no interested bees wandering around. No other admirers apart from the woman. No dog or cat which could elegantly swirl her tail and swish the vase with Bouquet over. That would be fun – broken glass everywhere, a sea of water dripping from the windowsill and running along the floor, the woman
jumping up, crying out:

-Aaaaah!
then leaving everything she was doing, reaching for a cloth, wiping, sweeping…

Then a single ray of sunlight suddenly dropped onto Bouquet so that he nearly jumped and turned all his blue, yellow and red eyes to the window from where the ray of sun came.

Here was a different picture. The sun was pouring down on the endless red roofs (a little exaggeration, but Bouquet had an emotional nature). The sky was shining.
A lonely aeroplane was wandering North East. Small white-framed bay windows sent deep, deep shadows, these windows’ glass glinting oh, so mysteriously. What was behind them? What smell did the smoke carry from the bright ochre chimneys arranged in such pretty rows of four and six?

What were all the naked branches of high, high trees whispering about?

So Bouquet shook slightly, climbed out of the vase, lifted the window frame with some difficulty and jumped on the windowsill. 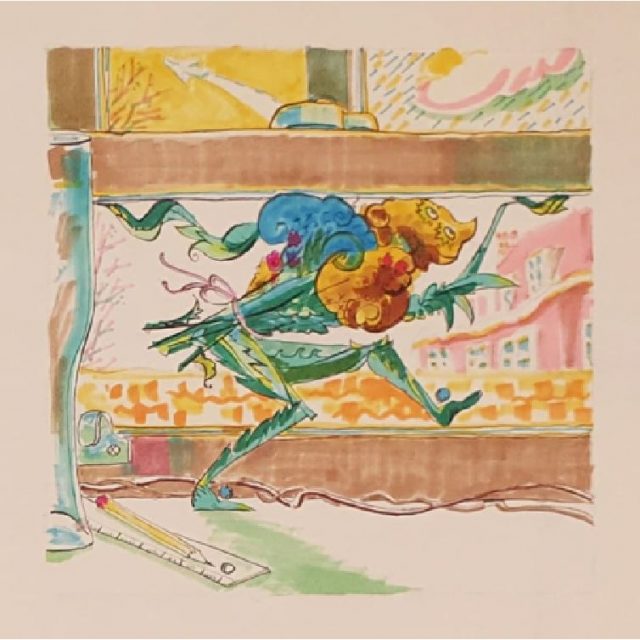 The freshness of the air outside and the breeze and all the smells and sounds poured over our hero. Probably not many sounds. All the windows were shut, and the streets were empty.

Our escape artist walked with pleasure along the sill and took a brave step onto the nearest rooftop. Here, on the edge between the brightest sunlight and the deepest violet shadow, where eyes nearly lost their sight because of the contrast, stood a pigeon.

said the pigeon in a low, super slow voice.

-| am from that flat,
he pointed with his best branch. 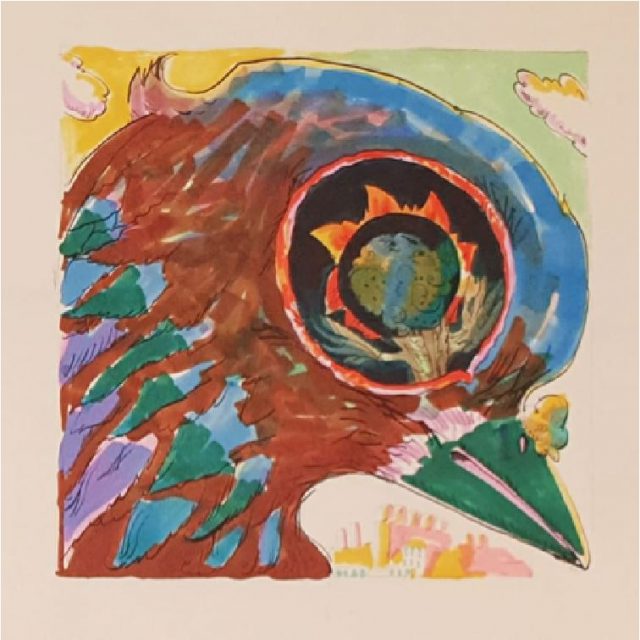 Indeed, the pigeon and everything around looked frozen in time, there was no movement, no sound. No wonder that it seemed to the pigeon that Bouquet was rushing!
The pigeon slooowly lowered an orange and pink eyelid over his spherical, ultraviolet, glistening eye, then raised
it back up. The eyelid returned to form the brightest outline for his eye, dark as the night and deep as the well on the hillock by the castle . Then the darkness itself closed around Bouquet and he was swallowed into the eye with all his branches and buttons. 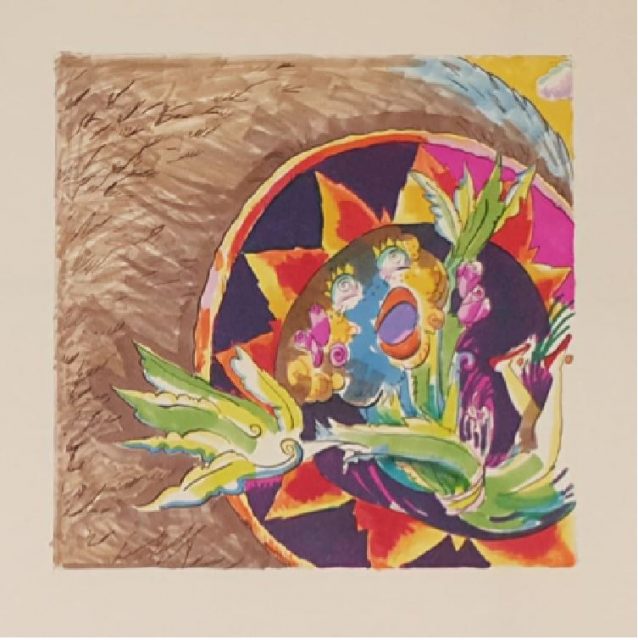 -Help!
screamed Bouquet, falling down or flying up – it was impossible to say which.

And help came. Millions of white sparks exploded around him in his flight (or fall). They were shooting by, ricocheting from something impossible to understand.
Each one had a little smiley face and gave Bouquet curious glances when they passed near him.

It wasn’t easy to concentrate, but Bouquet managed to say:

-Good morning, could you please direct me back to the roof? | haven’t explored enough yet.

sang the little chorus in return, the sparkles still shooting around him.

-Oh, gosh, thought Bouquet, not that….

Bouquet was spiralling upside down and he may have lost a couple of light green buttons by now. 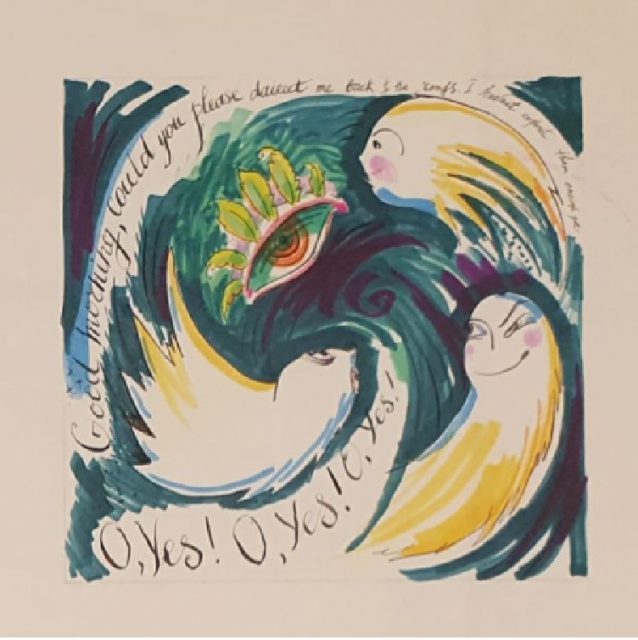 sang the sparks, now organised into some rows and circles, which began to look somehow dangerous.

-| am in shit, thought Bouquet.

Which he wasn’t, really, because he was still catapulting somewhere. He noticed a tiny difference in the sweet sparks’ faces when they passed by his yellow, blue and red eyes at speed. Now they became less sweet, some of them kind of unhappy even, some even grimacing. A sensation like a micro bite here and there, the buzz rose, and a burning smell came from far, far away in the dark nothingness.

-Shit, shit, shit…
sang the sweet chorus around him.

The bites became more noticeable, and it was difficult to think.

-Don’t panic, Bouquet,he thought to himself.

-Come back to your roots, thought Bouquet.

All of his short life now rushed in front of Bouquet’s yellow, blue and red eyes.
And the life of the woman who put him in the vase, incidentally.

Here she was, with a big colourful book on her lap, with two white and pink posies with various blue and light green eyes. Bouquet heard echoing words from the book, and posies happily jumped up and down. Bouquet shouted and shouted the magic verses and the sparks buzzed around him into one shining circle.

Bouquet landed on the ceiling. He quivered and shook all his leaves. Blinding shining became sunshine, and the ceiling spun around. 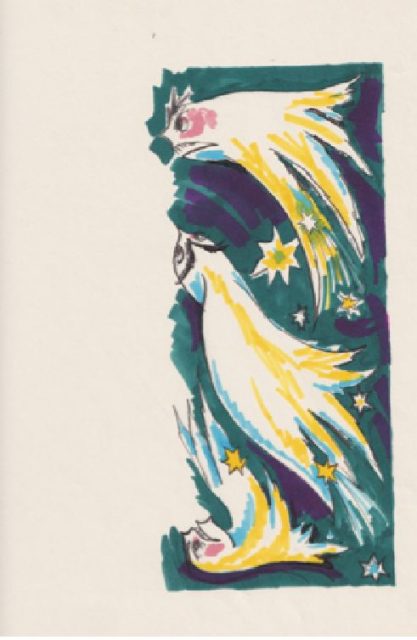 Bouquet found himself on his beloved rooftop, still just a metre or two from the window he escaped from what felt like weeks ago. 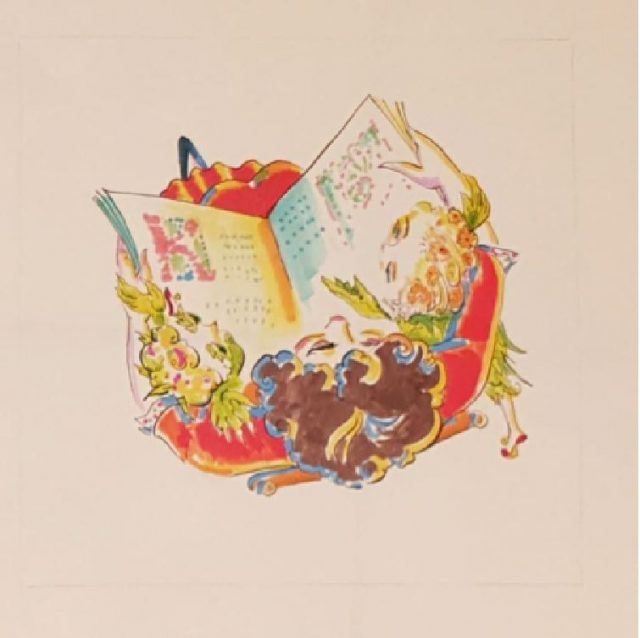 *Who in all the world is fairest

And has beauty of the rarest?

‘The Tales of the Dead Princess and the Seven Knights’